This past week, DraftKings announced that Charles Barkley is the company’s spokesperson as it prepares to launch the Barkley-centered ad campaign on Monday.

Barkley said via a press release from DraftKings that he’s excited about participating in the campaign:

“I’m excited to be partnering with DraftKings as they introduce their new sportsbook app. Their products and their advertising are great, and I’m happy to be part of their team going forward.”

According to the information provided by DraftKings Sportsbook, there will be three commercials in the new ad campaign featuring Barkley and recurring DraftKings character Dr. Aftkings.

“The campaign was designed to demonstrate how DraftKings Sportsbook brings fans closer to the sports games they love by adding the fun and thrill of competition to their experience,” the press release stated. “It features TV spots and digital/social videos including DraftKings’ iconic character, Dr. Aftkings, who diagnoses fans suffering from a range of new sports-related disorders. The cure? DraftKings Sportsbook.”

At the time of publishing, the DraftKings YouTube channel included the three ads that will go national. Each ad had a published date of Aug. 9.

Two ads are titled “Something’s Wrong” and the other ad is called “Good News, Bad News.” 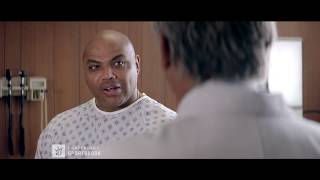 Perhaps the most interesting thing about the commercials — aside from the portly former NBA star — is that in one of the “Something’s Wrong” spots, DraftKings Sportsbook reveals an upcoming promotion.

The app is running a pick ’em promotion in which you’ll be entered to win $1 million if you can correctly pick at least half of the week’s games.

The trio of ads and the fact that Barkley will be the big man in front of the camera for DraftKings wasn’t even the biggest news of the week.

That came on Monday when, after a soft launch of its DraftKings Sportsbook app, the company got approval for a full launch of the platform in New Jersey.

The company seems to be creating as much momentum as possible, wasting no time in introducing Barkley three days later on Twitter:

Barkley has long been known as an outspoken, unabashed player and commentator. He spreads his opinions as liberally as one would slather a hot dog in mustard.

Barkley is a gambler himself

The former NBA star is, no doubt, a solid spokesperson for sports betting in general and NJ sports betting specifically because of his experience not only as a player but as a gambler.

Barkley has a long history of making big bets — and losing them. A recent article from USA Today reminded readers it was Barkley who once admitted he lost $30 million over the years in various forms of gambling.

However, he’s been outspoken about his support of legal sports betting. In one case, he said he doesn’t think that the emergence of legalized sports betting in the US will create problem gamblers.

He likened it to the few times he smoked pot during his life.

“I smoked pot probably five times in my life, and all it did was make me want to eat potato chips. So now they’ve got legal pot everywhere, it’s not going to make me go out and start smoking it,” Barkley said on The Dan Patrick Show. “So I feel the same way about gambling. Just because they got gambling legal, people who don’t gamble aren’t going to rush out to the casino or places like that. That’s my opinion.”

A three-time winner of the Florida Press Club Excellence in Journalism contest, J.R. Duren works as a freelance writer with a focus on the NJ online gambling and online casino industry. He writes for a number of publications, including Bespoke Post, Our Amazing Norway, Barcelona Metropolitan, Snooth, and the Villages Daily Sun.