The sports leagues had largely supported PASPA, which kept regulated sports betting confined to Nevada (plus a couple other states). National politicians liked it because it provided federal control over sports betting.

US Sen. Orrin Hatch (R-Utah) in particular liked it because he was one of the four original sponsors of the law.

The SCOTUS decision was not good as far as they were concerned.

New Jersey was overjoyed at the decision because it meant that sports betting was finally restored to state control. Since it was legalized, NJ sports betting has gone on a whirlwind adventure. Eight retail sportsbooks and six online sports betting apps are currently available.

But will control really remain with the states? Hatch and Senate Minority Leader Chuck Schumer (D-NY) aren’t taking the decision lying down.

Shortly after the decision was published, Hatch said in a statement:

“We cannot allow this practice to proliferate amid uneven enforcement and a patchwork race to the regulatory bottom. At stake here is the very integrity of sports. That’s why I plan to introduce legislation in the coming weeks to help protect honesty and principle in the athletic arena.”

The SCOTUS decision did leave room for Congress to regulate, so Hatch’s intentions should not be dismissed lightly.

On Aug. 23, Hatch then delivered a speech in the Senate, reaffirming his decision to introduce legislation “in the coming weeks.” 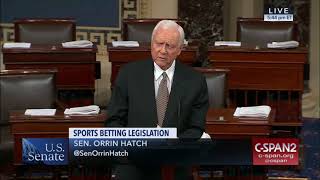 He said he had “grave concerns about gambling in general and sports betting in particular,” but the main thrust of his speech concentrated on his belief that legalized sports betting would “corrupt the integrity of the game.”

Schumer follows with his own take

Schumer backed up Hatch with a statement on Aug. 29. Schumer followed the integrity theme.

“To that end, I believe in the creation of a strong national integrity standard for sports gambling that will protect consumers and the sports games themselves from corruption.”

Schumer proposed a federal framework that would, among other things:

So far, the senator has said nothing that requires federal government intervention.

All of his points are addressed in the regulations in place in New Jersey or in the mechanics used by betting operators to run their businesses.

Integrity or a handout for sports leagues?

The real issue in Schumer’s proposal, supported by Hatch, and the one that New Jersey would resent the most if the legislation passes, is that he wants to give the sports leagues control over sports betting everywhere.

He proposes that the federal law should:

This takes us back to the arguments about so-called integrity fees. The leagues want to be paid a percentage of the wagers or revenues collected by sports betting operators.

Unsurprisingly the leagues opposed to overturning PASPA are right behind Schumer in his latest proposal. Just hours after publishing Schumer’s proposals the NBA, MLB, and PGA Tour issued a joint statement:

“As legalized sports betting spreads across the states, there is a need for consistent, nationwide integrity standards to safeguard the sports millions of fans love. We strongly support the legislative framework outlined by Senator Schumer and we encourage Congress to adopt it.”

Sports betting isn’t a simple business and a brief look at any of the operators offering New Jersey sports betting will discover that they aren’t going it alone.

The sports betting operators have “skin in the game.” If the fix is in, they are the ones being targeted to lose money.

That’s why they use companies such as BetGenius and SportRadar, which have long established technical means for checking for any suspicious betting activity.

“Sportradar provides the FDS to a host of major organisations in 17 different sports including football, rugby, cricket, ice-hockey, basketball and eSports. We also enjoy close working relationships with law enforcement agencies and police across the world.

Evolving through various incarnations since 2005, today’s FDS monitors odds movements across over 550 betting operators, including Asian and European bookmakers, betting exchanges and state lotteries, regulated and unregulated markets in order to get the most complete overview of global betting market. Currently, the FDS team, comprising of over 40 highly-qualified integrity analysts, operate from three separate offices in London, Manila and Sydney. They are supported by over 5,000 data journalists and over 75 freelance researchers across the world and oversee in excess of 160,000 matches each year, using their vast experience and expertise to investigate suspicious betting patterns around-the-clock.”

Schumer is talking about the problem of game integrity as if it was a new thing that legal US sports betting has created.

Bettors around the world have been betting on US sports for decades, and the issue of sports integrity has been a major issue for all this time.

It isn’t that sports integrity is not important; it is. But the solution isn’t going to be found at the federal level. Schumer (and Hatch) are scaremongering about a problem that has already been addressed.

The AGA is pushing back

Now that many of its members are embracing the new sports betting opportunity, it is not surprising that the American Gaming Association (AGA) thinks Schumer is talking out of his hat.

“Federal oversight of sports betting was an abject failure for 26 years only contributing to a thriving illegal market with no consumer protections and safeguards. New federal mandates are a nonstarter.

“The casino industry is working with stakeholders to ensure the proper protections for consumers, and the integrity of bets and sporting contests are included in state policy, universally implemented by all operators in those states, and overseen by effective state and tribal gaming regulators.”

The good news is that Schumer and Hatch have conceded that the sports betting genie can’t be put back in the bottle. Schumer’s framework also demands that the new law:

“Provide a pathway for legal online and mobile betting so that sports betting can come out of the shadows and we can further remove the competitive advantage of illegitimate online sports books.”

Maybe he hasn’t noticed, but that is exactly what New Jersey has already done. It doesn’t need any help from the federal government, thank you very much.