It’s a shorter week with Thanksgiving football upon us this Thursday, so I will focus on the 3 NFL games scheduled.

Thanksgiving is the original “Thursday Night Football” with NFL games scheduled every Turkey Day since 1920.

The mainstay of Thanksgiving Day football is the Detroit Lions.

Despite this, they have provided some truly memorable Thanksgiving moments. Let’s flash back to 1997 with Barry Sanders running roughshod all over the Bears:

The Dallas Cowboys hosted their first Thanksgiving game in 1970 and they follow the Lions early game with a mid-afternoon kickoff.

While there are some epic Cowboys games from Thanksgiving including the Leon Lett play and the Clint Longley comeback, but I’ve included the 1994 Cowboys game against the Green Bay Packers.

Amazing to watch this clip 25 years later. So much to see here. John Gruden as a Packers assistant coach. Reggie White in the backfield on almost every play.

An injured Troy Aikman wearing a “Planet Hollywood” jacket on the sidelines.

To top it off, current Cowboys Head Coach Jason Garrett leading a second-half comeback and a Dallas win: 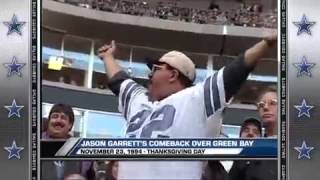 New Jersey bettors will be able to wager on all three (3) of the Thanksgiving games on DraftKings Sportsbook, both online and via their mobile app.

For Thanksgiving, DraftKings is giving everyone a free $5 bet when they opt-in:

In addition to the free bet, DraftKings also has three (3) other Thanksgiving promotional offers:

DraftKings has a full plate of team and player and team props, parlays and specials available for all 3 games. Also, check out their new “stats” feature offered for each game.

It’s a great tool to add to your handicapping with great trends and information. I’ve taken a deeper dive at some stats and trends via Draft Kings for each of Thursday’s games.

The Lions (3-7-1) have covered the spread in 5 of their last 7 Thanksgiving games.

That said, 2019 has been a challenging one for the Honolulu Blue and Silver. Starting QB Mathew Stafford has broken bones in his back and may not return this season.

Back-up Jeff Driskel took over for Stafford in week 10 and lost at Chicago in his first start for the Lions. Driskel also reportedly has a sore hamstring and his playing status is up in the air for Thursday.

The Lions 3rd string option is rookie David Blough who has never taken an NFL snap.

With a Chicago offense that is far from potent, coupled with the potential of an injured 2nd string or a 3rd string rookie QB facing the Bears defense, I think it’s worth it’s work giving the UNDER a long look here.

The Cowboys (6-5) may still be drying out after their soggy loss to the Patriots in Foxboro on Sunday. They begin their final 5 games of the season with a slim 1-game lead in the NFC East over the Eagles.

The Cowboys are 2-2 at home this year and face an upstart Bills (8-3) team that has exceeded all expectations this year.

The Bills are anchored by a ferocious defense that has allowed the 3rd fewest points in the NFL (1. Patriots; 2. 49ers) and have received solid performances from 2nd year QB Josh Allen and ageless RB Frank Gore.

A noteworthy historical trend is the Cowboys are 1-3 against the spread in their last 4 Thanksgiving games and the total has gone OVER in 3 of the last four (4) Dallas Thanksgiving Day Games.

There is also a drop-down menu that allows the bettor to select trends since 2010, very well done by DK!

The Saints and Falcons stage a divisional rematch after the Falcons shocked the Saints with a 26-9 in New Orleans in Week 10.

While logic might point to an offensive shootout when these 2 Dome teams play each other, recent history suggests otherwise as 4 of the last 5 meetings have gone under the total.

For those that like to isolate and bet individual quarters and/or halves, DK has a great feature in their stats portal that isolates a team’s performance by quarter.

Below, I have highlighted the quarter by quarter performance of both the Saints and Falcons since the start of the 2018 season:

There are some really great features on the DraftKings stats portal that are all well worth checking out before placing your bets.

While none of the three (3) local teams will be playing on Thanksgiving, they are all in action this Sunday. The Jets will try to win their 4th straight game when they visit the winless Bengals in Cincinnati.

The Giants will play their second consecutive NFC North opponent when they host the Green Bay Packers and, given their performances at home over the last 2 weeks, the Eagles will gladly welcome a change in scenery as they visit the Miami Dolphins.

Here are the current local betting lines as of Thursday afternoon via DraftKings:

After the 3 Thanksgiving games, Sunday’s schedule feature eight (8) 1PM starts and three (3) 4PM window games. The BYE weeks are over, with every NFL team in action in week 13.

My 3 Picks – from the Jersey Side

I had a decent bounce back last week going 2-1. The Broncos failed to bounce back from their 2nd half meltdown in Minnesota in week 11 and were totally dominated by the Bills.

The Jets won convincingly, and the Steelers won a battle of punts and field goals with an easy UNDER the total against the Bengals.

Here are my picks for the 3 Thanksgiving Day games:

This total line has crept lower during the week. The Bears managed only 19 points vs the Giants last week and the Lions were able to score only 1 touchdown vs the redskins last week.

Add in the questions this week around the Lions QB situation and a fierce Bears defense and the under almost looks like stealing money on Thursday afternoon.

The Bills have adopted a “Why Not Us” approach as they gear up for the final 5 games of the season. At 8-3 they trail the Patriots by 2 games in the division, but they have a 2-game lead in the AFC Wild card race.

The Bills stout defense that will face a Dallas offense has looked both potent and anemic at various points of this season. I will look at the consistency of the Bills to keep this game within reach and to cover the spread against the Cowboys.

The Falcons teased their fans with back-to-back convincing road wins against the Saints and Panthers only to return home last Sunday to lose to the Buccaneers.

They will have their hands full with a Saints team looking for revenge from their week 10 loss at home to the Falcons.

I can’t see the Falcons beating the Saints twice this year in the same season and look for a dominant Saints win on Sunday.

Mike McGough is a consultant who advises clients in such areas as media buying, sponsorship analyses, and procurement best practices. As a New Jersey-based sports fan and handicapper, he gives a unique perspective from business operations all the way to the betting windows. He specifically covers sports betting apps and online betting.