All three teams were favored in every game they played.

How did they do as the anointed chalk? It was a mixed bag.

The Yankees went 2-1 on the road against the Washington Nationals. The Phillies were 1-2 against the Miami Marlins at home, and the Mets had a significant ninth-inning collapse Saturday followed by a blowout loss Sunday. They went 1-2 at home against the Atlanta Braves.

The Phillies were victims of the highest split-percentage meltdown of the weekend on Friday. Then they failed as a -225 favorite at DraftKings Sportsbook on Sunday.

On Friday, we mentioned the “just because” money the Phillies could get because of pent-up betting demand on opening day.

Indeed, the Phillies took an astounding 96% of moneyline bets at DraftKings. The Marlins took 4% at +170 for the opening game, and a few bettors were handsomely rewarded.

Miami’s 5-2 triumph was by far the best overachieving result in the league on Friday, considering the odds and the splits. A tip of the hat to Marlins backers, who, realizing Miami had taken 10 of 19 games against the Phillies last year, took the Marlins at a nice price.

In the over nine runs prop, bettors produced 68% of the DraftKings volume and would have at least gained a push had Scott Kingery’s apparent two-run homer not hooked inches foul in the seventh inning for the Phillies.

The Phillies won in resounding fashion Saturday, 7-1, but unfurled a glaring weakness Sunday. They could not hold a 4-0 first-inning lead Sunday and lost to the Marlins, 11-6.

The Yankees, who shared the highest projected win total alongside the Los Angeles Dodgers — 37.5 at FanDuel Sportsbook and DraftKings — dominated one game and got hammered in another versus the host Nationals.

But in the tie-breaker, the Yankees rallied from a 2-0 seventh-inning deficit and triumphed 3-2.  These are the games that make the difference in season over-unders being hit.

Highlights: Gerrit Cole looked good in the opener, and Giancarlo Stanton hit two home runs in the series that nearly left the state.

Mets and the carryover sag

Teams slump after the denial of a sure win.

The Mets had beaten the visiting Braves in their opener Friday and were one strike away from going 2-0 on Saturday.

That is, until reliever Edwin Diaz surrendered a game-tying homer and the Mets lost in the 10th. What usually happens the day after such a loss? The losing team struggles.

The Mets, -111 at FanDuel on Sunday, did not even show up. They were blown out 14-1. Had there been fans, they would have endured a cascade of boos.

You can’t make this up: a Mets dog and a Braves home run

No precedent or prop bet could have covered what happened Saturday at Citi Field.

With no fans allowed in ballparks, some MLB clubs have allowed fans to send in a picture of themselves to get blown up and turned into a cardboard cutout. The cutout is then placed in one of the empty seats.

The Mets’ Michael Conforto and Jeff McNeil added a new twist — their dogs.

Early Saturday, Conforto’s two canine cutouts were placed next to Willow, McNeil’s dog, in the second row of the bleachers in right field.

There they were, amid thousands of empty seats, when Atlanta’s Adam Duvall hoisted an opposite-field drive that cleared the wall. Going, going, gone, and then, oh no, thwack. The ball nailed Willow right in the cardboard head. 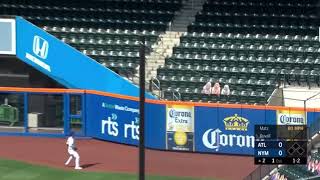 Willow is perhaps the most famous of the Mets’ dogs. McNeil met her on the field one year ago Sunday during a North Shore Animal League America promotion before a game. He FaceTimed his wife, Tatiana, during batting practice to ask if they could adopt her.

Neither expected things to get this “ruff.”

The Phillies-Yankees rivalry hasn’t been this good since the 2009 World Series, won by the Bronx Bombers. A number of factors are at play in the upcoming series. Stay tuned.

The Yankees were scheduled to meet the Phillies on Monday and Tuesday. The teams meet again Wednesday and Thursday at Yankee Stadium. The Yankees then host the Boston Red Sox over the weekend.

Breaking news: The Phillies-Yankees game was postponed for Monday after several members of the Miami Marlins tested positive for COVID-19.

Presumably, Phillies members will be tested and the league will go from there.

As for bets, check with your NJ online sportsbook of choice. A canceled game is one thing and usually means bets are refunded, but a postponed game is another thing entirely.

Philadelphia then faces the Toronto Blue Jays in that team’s adopted home, Buffalo. The Yankees then host the Red Sox for three games. What a week.

The Mets have a four-game setup with Boston. That’s Monday and Tuesday in Boston, Wednesday and Thursday at home, and then off to Atlanta for three games.

The scheduling is convenient for the Red Sox regarding travel. They will play a five-game stretch, Wednesday-Sunday, in New York.